“I am Liane Lewis” 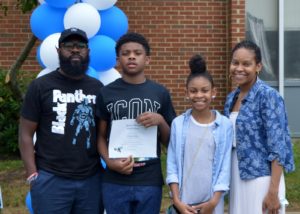 “Cancer has always kind of been my opponent,” reflects Liane Lewis.

It’s been part of her life since she lost her father at age 2, and its presence persisted as it took two of her uncles, afflicted her grandmother, and visited her mother – twice. Cancer moved in full-time when it struck Liane herself in her late 30s.

Though she empowered and supported many family and friends through cancer, Liane struggled to do the same for herself early on in her time as the patient. Cancer limited her, it made her shrink away from people – a foreign feeling for the effusive extrovert. Liane felt like she had to manage cancer on her own, unsure how anyone could understand her experience with the disease as a young adult.

Meeting Megan, one of Ulman’s Patient Navigators, early on in her treatment at Anne Arundel Medical Center helped Liane feel seen and understood, and gave her just the push she needed toward accepting her new reality of living with cancer.

From then on, Liane faced cancer one step at a time, on her terms. She has spent ample time in contemplation – during and after her year of breast cancer treatment – and generously shares the wisdom she has gained, the steps she personally took to do so, and how they align with steps she’s taken with Ulman.

Liane recognized that because of cancer, she would never be the same…and accepted it! Rather than fight against her reality, she affirmed to herself that she could make the best of her situation and use her experience to help others. “I am Liane Lewis!” became her mantra.

{At Ulman, Liane accepted the support and friendship of Megan, her Patient Navigator, getting over her initial roadblock of feeling that there were people who needed it more.}

Liane put her affirmation into practice, being mindful of her thoughts and mental state when times got tough, and intentionally speaking encouraging words to herself. She accepted encouragement, too, from her mother, her husband, her children, and friends she met through Ulman, mindfully acknowledging that the example she set would become her legacy.

{At Ulman, Liane became part of the greater Ulman community and built a supportive circle of other AYA cancer thrivers and survivors. Participating in Where YA Meet gatherings and game nights allowed her to make friends who could relate to her experience.}

Liane knows cancer chose her for a reason. She has become an educator, an ambassador, and an advocate for other young adults who, at that moment of cancer diagnosis, feel alone like she did.

{Brock invited Liane to share her story with the Ulman Board of Directors, whom she of course impressed! She also stepped up to teach about nutrition and cancer at a Where YA Meet gathering, and even joined the 2020-21 cohort of GameChangers to fundraise and continue to share her knowledge.}

Liane has accomplished all of this over the past year and a half, and she’s far from done! She is looking forward to reaching folks from underserved communities who have trouble finding resources, and to being a lifelong advocate for healthcare for all. Liane appreciates having the Ulman Foundation as a partner organization through which to amplify her message, and we are so grateful for her willingness to share her hard-earned wisdom with our AYA cancer community!

Now, when the opponent threatens, Liane stares cancer down and once again declares, “I am Liane Lewis!” Cancer – we dare you to find a stronger adversary.

Register for our March 20 Ulman House Party to learn how Ulman is taking its next step!