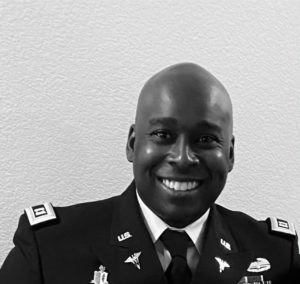 There’s a common perception that members of the military power through anything. For Ashley “Omar” Ellis – an Army Captain and nurse at Walter Reed Military Medical Center – this was true, but not by his choice.

Omar received a diagnosis of stage 3 hodgkins lymphoma in April 2020. Little did he know that he had already been living with cancer for at least three years.

Experiencing minor chest pain in 2017, Omar got checked out and was told, after imaging of the affected area, that he was probably dealing with costochondritis – a common inflammation of cartilage around the breastbone. For reasons still unknown to Omar, the presence of a mass in his chest detected by the scan was never communicated to him.

Fast forward three years and after a minor procedure for an unrelated issue, Omar went to the ER with extreme chest pain. He was examined, imaged, and discharged before receiving a call the following day with startling news: the doctor told him the mass in his chest “had gotten exponentially bigger.” Putting aside a great deal of confusion and anger to gather information and deal with the reality of the present, Omar let the cancer diagnosis sink in and set out on a treatment plan.

With Captain Ellis’ faith in the military medical system momentarily shaken, the actions of his oncologist, Dr. David Van Echo, immediately began to rebuild it. Dr. Van Echo’s urgency was twofold: the cancer was aggressive, and Omar is not only his patient and comrade, but also his colleague. Trained as a critical care nurse but flexible and willing to serve where needed, Omar had been filling a vacancy at the Murtha Cancer Center at Walter Reed. He immediately began an eight-month course of chemotherapy, and was surrounded by clinicians he knew and trusted.

In addition to a sudden and traumatic diagnosis experience, Omar faced the complication of living with cancer through the early days and months of the COVID-19 pandemic. Omar’s wife, Britnay, gave up her job to stay with their four children, ages 6 to 14, as they navigated virtual learning at home. Her responsibilities as mom and with the added visitor restrictions at the hospital forced Britnay to hand over some of Omar’s caretaking to a fellow superwoman – Walter Reed oncology nurse (and Omar’s supervisor!) Nancy Gambill. Nancy and the Ellises live near each other, so Nancy drove Omar to the hospital and home, invited the family to enjoy her pool, and remained a stalwart advocate for Omar’s wellbeing for the duration of his treatment. Even though Nancy is a civilian, Omar proudly calls her his “battle buddy” in his fight against cancer.

It’s true that in this situation, Omar didn’t choose to power through cancer for three years before he knew of its existence. But he does admit he’s guilty of the tendency toward relentlessness in other areas of his life. A serial student, Captain Ellis was nearing the end of his Nurse Practitioner degree upon his diagnosis – a designation he’d add to an already long list of educational achievements: Biology/Pre-Med Bachelor’s from Georgia Southern University, undergraduate ROTC program, MBA/MHA from South University, and countless military trainings and certifications.

What cancer taught Omar, in part thanks to insights gained from his Ulman Patient Navigator Michelle Martinez, is that education and achievement isn’t everything. By taking part in the AYA support group at Walter Reed, Omar gained not only new friends and a more extensive support system, but also an invaluable perspective on the paths life can take. He realized it’s okay to say “I can’t,” that experiencing the feelings associated with trauma and upheaval is healthy, and that moments with his children and wife are more fleeting than he had previously cared to admit.

So, post-cancer, Captain Ellis probably won’t power through quite so many more courses or constantly strive for the next promotion. But Omar, aka Dad, will very likely power through overtimes of rec soccer games, extra bedtime stories, and international adventures with his family.