Cancer creeps its way into my memories because cancer has permeated nearly my whole life.

Over the past fifteen years I wholeheartedly supported and loved my only brother Zachary through his valiant journey with cancer to his peaceful end on August 26, 2015.

He also encountered the following complications: three cardiac arrests and heart failure, a bone marrow transplant for AML, a heart transplant due to chemotherapy causing cognitive and organ degradation, End-Stage Renal Disease, and much more.

As a young child I remember distracting Zach from his treatments by building Legos, playing games, and providing bliss through love and laughter.

However, after I finished middle school, cancer’s side effects began to relentlessly harm Zach and haunt my teen years.

On June 12, 2012, cancers’ complications started to ravage my brother’s health and drain my family’s energy.

From this day until July fifteenth, Zachary silently battled complications in a coma. I depressingly spent this time wondering whether Zach would live or not.

Miraculously, Zach bounced back and escaped the hospital in early August, but in November 2013, Zach began to hibernate while his kidneys almost reached complete failure. To save Zach’s kidneys, he received dialysis and his blood counts improved.

Nevertheless, he began to have trouble distinguishing family members and communicating properly, so I painfully watched Zach flirt with the brink of death again.

From January 2014 to March 2014 I constantly carried an emotional deadweight because I endured seeing Zach barely functioning only thanks to hospice care.

However, Zach perked up mentally in March 2014, and he was taken off hospice care. After March of 2014, Zach’s health remained stable for over a year, so I prized every second with him including a trip to Legoland in Florida—a dream together as brothers.

Throughout Zachary’s ongoing war for his life, he never succumbed to despair and never complained.

Instead, he focused on the beauty of making the most out of the time he had by pursuing his creative academic talents and radiating his positive energy to help others including myself through tough times.

Notably, Zach always wanted to learn whether he was at home or in the hospital by receiving tutoring.

Zach always looked forward to learning and to life with an enthused curiosity that I acquired from him at a young age. 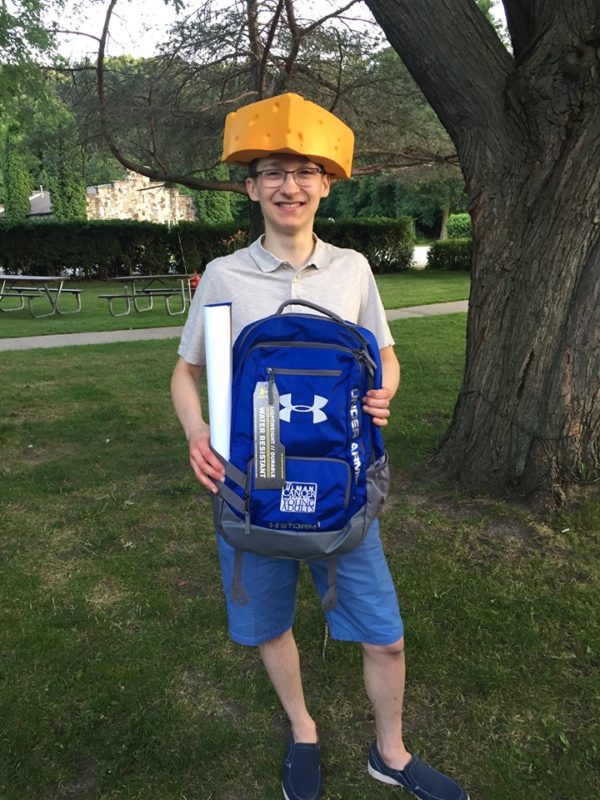 To this day, our shared passion for education empowers me to forever seek and treasure life’s wisdom.

For example, Zachary’s humble yet determined character motivates me to maximize and enjoy my life by combining my learning fascination with my drive to help others through Spanish tutoring.

In addition, Zach put his heart into everything he did which motivates me to follow my academic interests to benefit others.

Since I have a fascination with math and food science, Zach’s appreciative legacy inspires me to enrich Earth and its inhabitants through my collegiate studies of sustainable eating.

Indeed Zachary only lived 19 years; however, Zachary turned his 19 years into a lifetime and continues to inspire me to believe in myself and love the beauty of experiences through opportunities.

The summer of 2015 hit Zach and my family harder than ever before. On Tuesday July 22, 2015, I experienced the nightmare of Zach going into septic shock and repeatedly crying “I don’t want to die.”

For the next two weeks Zach was hospitalized because he almost went into cardiac arrest and died.

During this time his mental condition deteriorated into a confused, dark state as he saw fake dangers and could not process basic aspects of life like facial recognition.

Eventually, on August first Zach came home to receive hospice care, and I felt like a train hit me since I saw my brother, mentally numb and physically incapable of moving.

Surprisingly, through August Zach sometimes showed mental stability, so he and I shared brotherly affection by once again building Legos together and playing board games.

However, on August 26, 2015, I watched Zachary taking in labored breaths, and finally, Zach’s last breath slowly seeped out.

From Zach’s peaceful passing, I have fully learned that when life gives me lemons, I can push through to make sweet lemonade out of life by loving and making the most of every moment.

Zach’s battle with cancer and passing has made me humbly recognize life can change in an instant, so I try to savor every passing second.

While the hardship of my brother’s cancer loomed over every aspect of my life, I grew closer to my family and developed my driven nature to maximize my legacy through education and passions.

In addition, my encounter with cancer’s deleterious effects has fueled me to happily strive to help anyone I meet achieve a better state of health.

Lastly, cancer brought light to my dream job of nutritional sciences which allows me to positively impact others.

Although cancer’s chaos robbed me of a regular life, I discovered my coping mechanism by focusing on my enthusiastic fascination to absorb knowledge like a sponge.

Throughout my schooling, learning gave me a sense of normalcy because I could escape from cancer’s controlling wrath and enjoy something I chose to pursue.

Likewise, instead of dwelling on cancer’s reaping, I learned to relish the beauty of education to give myself an enjoyable and academically rewarding break.

Moreover, since cancer showed me to make the most out of life, I hope to enrich my college experience by studying abroad while working towards a Bachelor of Science degree.